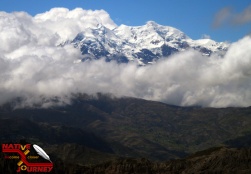 In the Andean Culture, it’s common to carry out different types of offering rituals to mother earth or Pachamama, and the Apus Achachilas or Spirits of the mountains, and can be called K’oa or Mesa. The reasons why to do them as well as the ways to elaborate them can be very varied. For example, the first Friday of every month is a common day when an offering is given for general well-being. Other motifs can be: health, financial prosperity, good luck, payment for offences committed, thanking the earth for the blessings received, facilitating a better future or shedding evil energies. The offerings are prepared with a varied repertoire of ingredients that can include sweets, seeds, plants, animal parts, coloured papers, wools, incense, wine and coca leafs.

Story of a Mesa Offering I Accompanied.

It all began thanks to my friend Marie, who had come from Mexico to visit Bolivia and wanted to deepen into its culture and its land. As a friend, I took Marie to Kallawaya Mario, (read more about Kallawaya medicine men) who has his consultation room in the City of La Paz. Originally, we were going to travel to Mario’s community where we would have better opportunities to treat any ailments Marie could have, as well as taking her to one of the most beautiful places I’ve ever known. But she said that she had no diseases or things she wanted to treat, and that she only wanted to give an offering to the Pachamama.

So the great Illimani Mountain made the call, the great authority, the great god, guardian of the City of La Paz, last of all the great snow capped mountains in the Cordillera Real Range. To him we would give the offering, so that he may listen to our prayers, he may receive our offering and so he may open the ways for us and give us prosperity.

To my own personal symbolism, Apu Illimani means “Mountain of Light”. As I further Investigated its name, I have found many different translations. One of them is “Mountain Foundation of Light and Abundance”. To Mario, Illimani is “The Mountain to Whom we do Offerings to Ask for Prosperity” In other translations I have found it is called “Mountain of the Golden Eagle”.

We left on a shuttle car, around 10 in the morning. A panoramic crossing of the city would approach us to a low mountain pass close to the town of Uni, where a lagoon marks the place to stop. In a mostly-hilly place, a small flat area is always a precious and powerful place where water, life and sacred energies flourish. The car would wait for us while we carried out the ritual atop a nearby hill behind the pond. Three powerful pyramid-like coloured clay mounds, one larger than the last, are the three optional places where to carry out the offering. 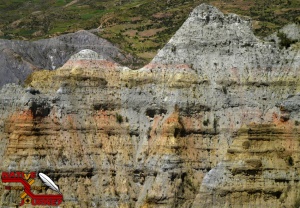 We quickly climbed climbed the tallest of them to discover the most breathtaking view of the Illimani Mountain. This place is key, a perfect axis throne, between Illimani and the great ravine where the City of La Paz is built. Mario had everything we needed, all the chosen ingredients for the offering and the firewood to burn it. I carried Coca leafs, alcohol, wine and cigarettes, which are all important things that must be given by those who participate in the offering. After an invocation on the hilltop, Mario began preparing the offering. As he did so, I prepared my “quintu” or selection of coca leafs, which are prayed to and offered to your fellow companions. Then, Mario Indicated us that we where to select twelve coca leafs each, the prettiest of them, for the ritual. As we slowly added coca leafs to our «Coca leaf Chew» we chose the leafs that where to be offered.

First, Mario prepared the “Suyu“, a llama foetus from natural abortion, which is the most valuable of all the ingredients in the offering. Under a constant bathing of prayers and gestures, a pair of specially-made-for-pachamama sweets with a specific symbol each, are tied to the Suyu with white alpaca wools. Once adorned, it is presented to the sacred mountain, with long gestures and movements. Then, Mario placed the adorned and blessed Suyu on Marie’s back, and tied it there as if it was her baby. As that happened, I approached the mountain by my own and offered him a long prayer.

A white sheet of paper folded to serve as a tray, is the base of the offering where the rest

of the ingredients are laid. Alpaca wools are stretched and carefully placed to make a circle. At this point we have the two of the most important symbols of the Andean world, the Circle and the Square, the first representing the feminine and the later the masculine side of the duality of creation. Mario continues adding ingredients, all of them inside the feminine circle made by wools. First, a bed of dried wira k’oa herbs. Then, one by one, specially-made-for-pachamama sweets are laid, each one of them containing different symbols and figures that represent different things that a person may wish to ask for.

Before laying each sweet, it is prayed to in the secret Kalliwallai language of the Kallawayas. Marie manifested that she wished to ask for her family, her mother and her kids. I also manifested I wanted to ask for my family and my community. Each request was considered by Mario and was prayed for, in the sacred language. Other things we didn’t ask for, like wealth and prosperity, where not forgotten by Mario.

Once the main sweets are laid, other series of white sweets without drawings are used to lay prayers in the circle. Sweets are made specially for Pachamama because in the Andean worldview, you must offer the most precious things that exist. In a land where fruits and sweet things are scarce, anything sweet is considered as a thing of richness and well-being. This is the reason we offer sweets to the earth, amongst other precious things.

Once the remaining white sweets are laid, the circle has become full. The Kallawaya continues placing unt’u, llama lard. Llama is considered one of the most sacred animals. Thanks to him, humans can exist here. They help people carry their things and are also a vital source of food. To the Andean people, grease or lard is also a very valuable ingredient since it is the energy that an animal accumulates. First, pieces of lard are laid in the circle after being prayed to, later, other pieces are adorned with shiny sheets of gold and silver coloured paper, representing this two, very precious metals. Symbolically, we are offering the energy of the most sacred animal, wrapped with gold and silver. Atop all the laid ingredients, Mario carefully spreads three different types of incenses and keeps a part of them to use later on.

The Mesa is close to being complete. The coca leafs that each participant had chosen, are carefully prayed to, waved and placed strategically inside the circle. Then, Mario asks Marie to stand up and wave to the mountain, moving her arms in constant round circles as a symbol of calling and attracting the positive energies that irradiate from the sacred mountain. Then, he asks Marie to hug herself, the energies of the mountain that where attracted to her arms, are now hugging her. At that precise moment, a Mountain Caracara, a local bird of pray called in Bolivia “Maria” flew by a few meters above Marie’s head, as a very good sign of the spirits blessing her.

To end the laying of the offering, Mario took Marie to the edge of the hill, where he a

sked her to kneel. He took the Suyu out of her back and presented it to Illimani. He moved it in circles and asked her to kiss it. He then placed it atop the offering, which was already placed atop the firewood. He then gave Marie two nuts with shells, and asked her to break them with her hands. By looking at the shape and colour of the nuts inside the shells, Mario was able to read Marie’s energy. In respect to her we choose to keep what he said to her private, but we can say he diagnosed that there was part of her body that needed attention. Then he gave her the other nut to break. This time, the nut said she had a very good future coming, and that the ritual had worked well.

We continued giving wine to the offering, what we call in Bolivia ch’allar, which means, to bless something by pouring some type of drink on it. We blessed the four corners of the offering with wine and pure alcohol, then offered the earth, the sky and had a small drink ourselves, in symbolism of sharing everything with the earth. Once blessed, Mario lit the offering on fire. Lot’s of wind made it difficult for Mario to finally get it going, it wasn’t until he added some dry hay that it finally lit well.

While it burned, with two flower bouquets and a couple of eagle feathers, Mario began cleaning Marie’s body and aura. With all sorts of different movements, very repetitive and dedicated, and with a lot of patience, Mario cleansed all the bodies of energy in Marie. The flowers and the feathers were then offered to the fire also. The work was done. We then needed to leave Pachamama eat the offering alone, we had to leave before the fire stopped burning. We did so.

Live this experience with Native Journey»

We support and are supported by: